What is HIV/AIDS?
HIV stands for human immunodeficiency virus, which is a virus that attacks the immune system and destroys cells that help the body fight off infections. Therefore, HIV weakens the immune system and makes a person more vulnerable to other disease, infections or certain cancers. If HIV is left untreated, it can lead to AIDS, which stands for acquired immunodeficiency syndrome. AIDS is the most advanced stage of an HIV infection.

How Does HIV Affect Me?
HIV/AIDS continues to be a persistent public health challenge for the United States and other countries around the world. While there has been improvement in enabling individuals with HIV to live longer and healthier lives, the virus still imposes a burden economically and personally. According to the CDC, in 2018 approximately 1.2 million individuals in the United States had an HIV diagnosis. Additionally, there were 37,968 new HIV diagnoses and 15,820 deaths. The statistics also indicated that HIV affects groups of people differently.

How Does HIV Spread?
HIV is spread by direct contact with bodily fluids from individuals diagnosed with HIV and  detectable amount of HIV virus in their blood, called the viral load. Bodily fluids include semen or pre-seminal fluid, rectal fluid, vaginal fluid, blood or breast milk. For transmission, the bodily fluids must travel to the bloodstream of an HIV-negative individual. This occurs via a mucous membrane (rectum, vagina, mouth, tip of the penis), open cut or sore, or from injection. Examples of ways HIV can spread includes.

What are the Risk Factors?
HIV can affect any individual, regardless of their race, ethnicity, gender, age, sexual orientation or community. However, certain behaviors, populations and communities can place an individual at a higher risk of getting an HIV infection. Refer to the following chart for risk factors and risk reduction strategies.

*For tips on how to use condoms, visit: https://www.hiv.va.gov/patient/daily/sex/condom-tips.asp

How is HIV Treated?
HIV treatment typically consists of a regimen with a combination of 3 or more antiretroviral
(ART) medications. The ART therapy does not cure HIV, but can greatly decrease the amountof replication in the body. This allows the individual’s immune system to become stronger and be able to fight off future infections and even cancer. All individuals diagnosed with HIV will be on lifelong ART therapy. 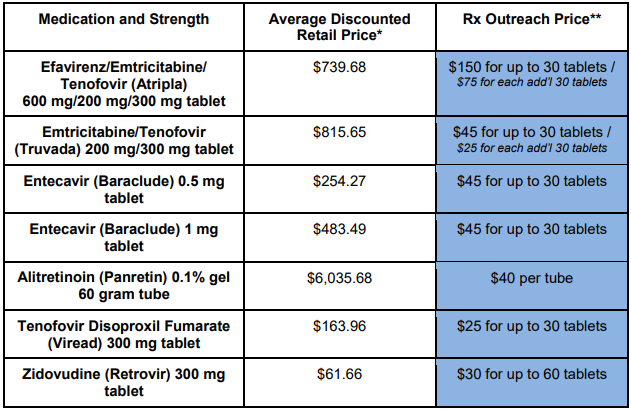 *Calculated from CVS, Walgreens and Walmart as listed on GoodRx July 9, 2021
** Listed price includes cost of shipping
Prices are subject to change, please visit https://rxoutreach.org/find-your-medication for the
current pricing.